An article by Andrea Gewessler
What strikes you when you meet Jill is her calm, empathetic and totally unassuming nature and you find the same qualities reflected in her artwork.

Jill’s love for drawing started in her childhood. Her father was a commercial artist and there were art materials galore knocking about in every part of their house. She would huddle in front of the telly watching Blue Peter, sitting on the sofa with a chair as a table, holding a drawing board and drawing. Homework would get done but drawing was her real love. At her young age she was fascinated by ordinary girl interests of the time, ballerinas and ice skaters, but very soon she started exploring her dad’s art books about Velázquez, Durer and Vermeer, which influenced her taste for representational art and detail.

Art has always been part of who Jill is. When her parents talked about her it was something like, ‘Jill is really good at art.’ Typically for the 1960s that was about as much encouragement as you could hope for! Because Jill was bright and good at the academic subjects, the school she attended wanted her to focus on academic options and drop art but her mum fought it out with the headteacher and she continued.

Her upbringing was in a council estate in South London and like most working-class people then, her parents had left school young and went to work straight away, but they were very politically aware and interesting and interested. Her dad, who had a very romantic view about being an artist, wanted Jill to go to art school with every fibre of his body. He never had the chance himself and believed it would have made a world of difference to his own life and wanted his daughter to have the benefit of it. At 16, Jill left school (which was fairly rough and its share of bullying and teenage pregnancies) to take her A levels and Art Foundation at Croydon College. The focus in those two years was very much on art and a great social life. Jill loved life drawing and the quite academic approach which her tutors took to it. She still remembers the excitement, peace and exhaustion she felt at the end of her life drawing classes.

After her Art Foundation, however, Jill started a degree in art but dropped out after a year, feeling lost and disillusioned as nobody that she knew growing up had ever gone to university and she worried about what she would do after it. She took a job at Carshalton College, which eventually led to her teaching and a career in the adult education sector spanning head of the art department and head of service. During the last ten years of her education career, she completed her BA in Fine Art at Wimbledon School of Art in 2007 where she won the Rootstein Hopkins Foundation award for her quality of drawing. The award fully funded her MA in Drawing at the University of Arts London, which she achieved in 2009. Since 2018 she has been a full-time artist.

One of her peak experiences since then has been selling a painting to the National Football Museum in Manchester. Her painting and an accompanying video interview with her was exhibited in the best spot in the exhibition next to a Hockney and in the company of Picasso, Banksy, Lowry and Cocteau, which gave her a great boost of appreciation and feeling valued.

Generally, Jill the artist feels most fulfilled just before she finishes a piece of work. Like many artists she experiences moments of doubts when in the middle of a piece, but she also knows that the feeling of doubt morphs into a feeling of ‘I got it’ and then she wants to slow down, like when you read a good book. First you race towards the finishing line, and towards the end you want to savour every moment because you do not want it to end. This feeling of excitement and elation when you have turned the corner is rewarding beyond words.

Jill’s artistic interests are quite varied. There is not just one subject that is important to her. However, people are a key focus. No wonder her whole career was focused on people, Jill likes people. She finds them interesting, their history and how people present themselves. Lately, she has also found a love for still life, which she likens to drawing the silence. All there is are the objects to be drawn, the paper, the artist and silence.

Jill wants her work to be accessible. She talks about how art can also be quite selfish and feels strongly that that has its value too, but when you want to show your art it needs to get some kind of meaning across to the viewer. Jill wants people to see her work and connect with it. The connection may be a feeling it may stir in the audience or a memory that it revokes. Mostly Jill has a particular feeling or emotional response in mind when she draws. For instance, when she draws a still life, she wants to instil a sense of calm, that’s why she often focuses just on the essential, leaving out busy and distracting backgrounds.

Portraits are a very personal thing and it’s like you are creating a three-way relationship between the model, the artist and the viewer. While Jill loves working from life, she also knows it’s not always possible and many a portrait commissioned has been drawn or painted from a photograph. She also loves working with old photographs, often leaving out heads and focusing on other details, so that it can spur viewers’ memories of similar photographs and experiences they might have had. It gives the viewer the possibility to engage with themselves as a storyteller and finish off the story in their heads and in the process make the things that are invisible, visible.

For Jill it’s not all about the end product. She actually loves the journey she is on when she is working. She enjoys the process and the level of detail and getting it right. It’s a Zen-like experience of really being in the moment and relishing it.

When you see the incredible detail and mastery of Jill’s work, it is not surprising that both her early influences of Durer and Velázquez and her more recent ones like Dutch photographer Rineke Dijkstra and Latvian-American artist Vija Celmins all work with the same incredible precision. Art transports her into a different world, quite literally removing her from the hectic, fast-paced lane we are all expected to operate in to a more introspective and calm space where working slowly is honoured and appreciated.
December 2019 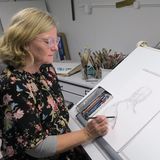